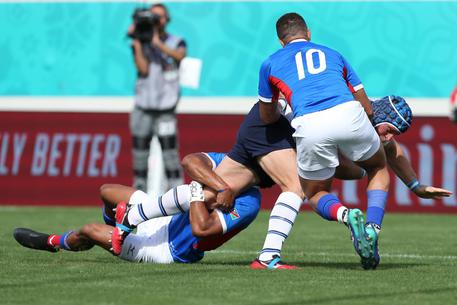 (ANSA) - Rome, January 20 - Italy coach Franco Smith said Monday that hooker Luca Bigi will be the Azzurri's captain for the 2020 Six Nations, taking over from long-standing skipper Sergio Parisse.
Parisse has effectively retired from international rugby although he will make a farewell appearance against either Scotland on February 22 or England on March 14, at Rome's Stadio Olimpico.
The match that was expected to be the number eight's swansong, a clash with New Zealand at the World Cup in Japan last year, was called off due to extreme weather. Bigi, a 28-year-old who plays for Zebre, has 28 caps. "No one knows how we want to play and the surprise element is in factor in our favour," said Smith, who has been named caretaker Azzurri coach after Conor O'Shea stepped down following the World Cup. "We want a model of played based on our characteristics that can lead to good results.
"Parisse has given a lot to Italy. He played five World Cups.
"He has said he wants to be recalled for a big match and so we'll see how to include him". Italy start their 2020 Six Nations campaign in Wales on February 1.