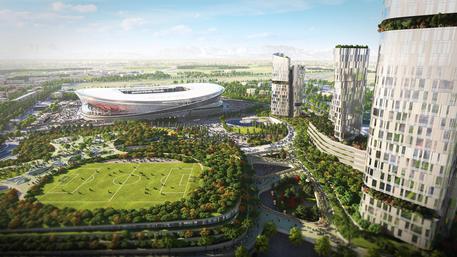 (ANSA) - Milan, January 21 - Inter Milan and AC Milan on Tuesday presented plans to keep part of the iconic San Siro stadium alongside a future new ground.
Under an original plan, the much-loved ground was due to be demolished. The old stadium would no longer be used for football matches but only non-professional sporting activities, the clubs said in plans presented to Milan city council.
The stadium, which is named after Inter and Italy great Giuseppe Meazza, would be "prevalently devoted to basic sporting functions and entertainment functions, to keep the San Siro district alive 365 days a year, as a service and benefit for the citizens," the clubs said in a statement. The Meazza will this "maintain at least a part of its present facility", the statement said.
"The clubs will continue in their technical and economic analysis of the plans which they have presented, always in line with the guidelines indicated by the city council," the statement concluded. City council sources said the clubs had outlined the possibility of creating a "sporting district" in the area.
Inter Milan and AC Milan last summer presented the masterplan for their new stadium at San Siro to Milan city council.
It is a 1.2 billion euro plan involving private investment to build a new modern sports area in the district where the current Giuseppe Meazza Stadium is.
Milan city council said the plan "merits careful analysis". The two clubs announced on June 24 that they are going to build a new stadium to replace the San Siro, which was originally set to be demolished.
"We'll build a new San Siro next to the old one, in the same area," Milan President Paolo Scaroni said in Lausanne where he and Inter CEO Alessandro Antonello were in the delegation that helped the Milan-Cortina bid land the 2026 Winter Olympics.
"The old one will be knocked down and new constructions will take its place".
When asked if the clubs were undertaking the project together, Antonello replied: "absolutely".