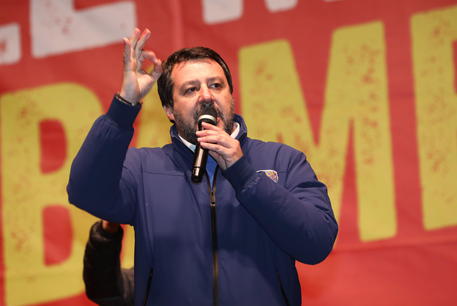 (ANSA) - Bologna, January 24 - Nationalist opposition League leader Matteo Salvini on Friday said he was not someone who upholds the presumption of innocence when it comes to drug-related crimes, following his heavily publicized anti-drugs stunt in the Emilian capital Bologna.
Speaking to Rai3's Agorà program, the anti-migrant former interior minister said: "I am not a guarantist against drugs, it is death".
Salvini rang the doorbell of a Tunisian family in Bologna in front of journalists and camera crews earlier this week, asking if a drug pusher was there.
"If this young man will not be deemed a drug pusher he will have my apologies", said Salvini who was led to the flat by a local mother of a dead addict who told him a pusher allegedly lived there. "Drugs are sold in that building - full stop".
"I don't go arrest people.
"But I am happy that Italy knows there is drug trafficking there".
Tunisia's ambassador to Italy on Wednesday said Salvini was guilty of "deplorable provocation".
Ambassador Moez Sinaoui told ANSA he had written to Senate Speaker Maria Elisebetta Casellati to complain about Senator Salvini's "regrettable" behavior, which he said had shown "a lack of respect for the private abode of a Tunisian family" and had been "divulged in an ostentatious way to public opinion".
Salvini has been campaigning heavily in Emilia-Romagna, the region around Bologna which elects a new government and governor on Sunday. Currently in Emilia-Romagna opinion polls, the Democratic Party's incumbent governor Stefano Bonaccini is slightly ahead of the center-right candidate, League party member Lucia Borgonzoni.