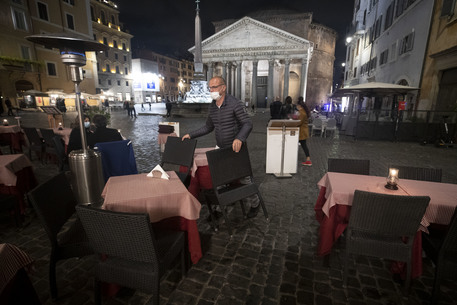 (ANSA) - ROME, OCT 26 - Italy's bars and restaurants have to stop serving at 18:00 on Monday as the latest round of restrictions aimed at combatting the rising spread of COVID-19 kicks in.
The nation's gyms, swimming pools, cinemas and theatres must close too as part of the package presented by Premier Giuseppe Conte on Sunday, when Italy registered over 20,000 new cases of the coronavirus.
Eateries are able to provide take-away services until midnight under the decree, which remains valid until November 24.
Furthermore, 75% of classes at Italy's high schools and universities will be given via distance learning.
This was reportedly a compromise solution as Italy's regional governments wanted to go for 100% distance learning at high schools to reduce the number of people in circulation and ease the pressure on public transport, but Education Minister Lucia Azzolina was against this.
Soccer games and other sporting events must take place behind closed doors, putting an end to the limited access of up to 1,000 fans that had been allowed.
The government has urged people to avoid unnecessary travel outside their home towns and not to use public transport when they can.
Conte said the measures were aimed at protecting the economy and people's health and averting the need for another national lockdown.
The government has promised the sectors affected will get aid.
But opposition parties alleged that the package is confused, is unfair on some sectors and risks not being effective in reducing contagion.
Ex-premier Matteo Renzi, whose centrist Italia Viva (IV) party backs the government, was unhappy too.
"While sacrifices are (again) being requested, it would be very useful for the government to explain what is the scientific data and analysis upon which it takes these decisions - scientific data not the emotions of an individual minister," Renzi said in his e-news newsletter.
He said he would ask Conte for amendments regarding "restaurants, places of culture and sporting activities".
Several regions, including Lazio, Campania, and Lombardy, have imposed curfews at night in a bid to stop infection being spread while people are out socializing.
There were violent protests against these curfews in Naples and Rome at the weekend. (ANSA).