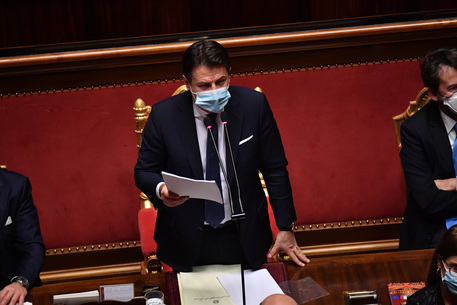 (ANSA) - ROME, JAN 19 - Premier Giuseppe Conte appealed to the Senate to get behind his government on Tuesday on what is set to be a day of reckoning after it was plunged into crisis by Matteo Renzi's Italia Viva (IV) party pulling its support.
The executive faces the second of two crunch confidence votes later on Tuesday.
It passed the first in the Lower House on Monday with an absolute majority of 321 votes in favour, 259 against and 27 abstentions.
But the test in the Senate, where the government's majority was already thin, is set to be even stiffer.
Conte is appealing to so-called 'constructor' lawmakers from outside the ruling coalition to vote for the government and stop it collapsing in the middle of the COVID-10 pandemic.
Conte told the Senate on Tuesday that the pandemic makes it more important for his government to stay afloat.
"The country has united with the pandemic, with its suffering," he said.
"The government's sense of unity has increased. The reasons to be together have increased". The two senior partners in the ruling coalition, the 5-Star Movement (M5S) and the centre-left Democratic Party (PD), have already rejected the idea of patching things up with ex-premier Renzi.
But the PD has kept the door open to individual IV lawmakers that break ranks from the centrist group.
Conte accused IV of having caused turmoil when it was within the coalition.
He said it was guilty of continually making demands that were "clearly divisive with respect to the sensitivities of the other parties in the ruling majority.
"It is complicated to govern with those who continually undermine a political balance patiently reached by the parties of the coalition," he added.

The premier denied trying to tempt lawmakers into supporting the government by making deals, saying he was appealing for "limpid, transparent support".
He said the nation needed a government and parties that were "aware of the difficulties we are going through and the delicate nature of the job.
"Women and men who are capable of shunning selfishness and of crushing the temptation to look at personal gain are needed," he added.
"Politics is one of the most noble arts if directed towards the well-being of citizens.
"When politics strays from these needs, it risks being marginal or, worse still, of giving rise to anger and violent confrontation".

The centre-right opposition has called for snap elections, arguing that, even if the government survives the confidence votes, if will be too weak to effectively rule the country.
(ANSA).