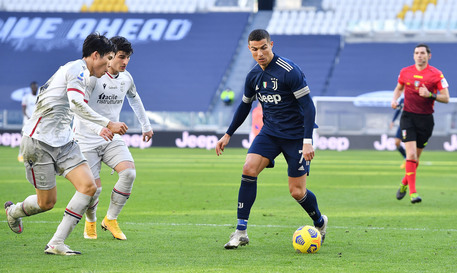 (ANSA) - ROME, JAN 25 - Champions Juventus gained ground in the Serie A title race by beating Bologna 2-0 at home on Sunday after leaders AC Milan and second-placed Inter dropped points on Saturday.
Milan were thumped 3-0 at home by Atalanta but Inter missed the chance to pull level at the top of the table as they were held to goalless draw at Udinese.
Milan have 43 points at the season's half-way mark, while Inter have 41 and Juve are fourth with 36 points and a game in hand.
Third-placed AS Roma recovered from a tough week in which they were dumped out of the Italian Cup and lost the Rome derby to Lazio to beat Spezia 4-3 on Saturday.
Spezia were the same team that beat 4-2 Roma in last week's Cup tie, although Roma would not have progressed even if they had won as blunder saw them make six substitutions, one more than the maximum allowed.
Roma have 37 points from 19 games. (ANSA).