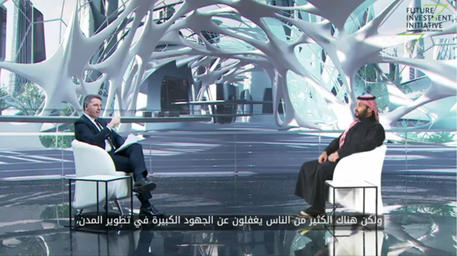 (ANSA) - ISTANBUL, MAR 3 - Ex-premier Matteo Renzi's praise of Saudi Prince Mohammed bin Salman (MBS) as a reformer is incomprehensible, the girlfriend of slain Saudi reporter Jamal Khashoggi told ANSA on Wednesday.
Centrist Italia Viva (IV) party leader Renzi said on a visit to Riyadh during Italy's government crisis in January that MBS, whom the CIA say ordered Khashoggi's murder and dismemberment in the Saudi consulate in Istanbul in October 2018, was the promoter of a "new Renaissance" in Saudi Arabia.
In an interview with ANSA, Khashoggi's former girfriend Hatice Cengiz said "it is not possible to be well informed on Saudi Arabia and at the same time maintain that hereditary prince Mohammed bin Salman is a reformer.
"I really don't understand why (Renzi) did that.
"Perhaps he should try to understand the reality of the situation in Saudi Arabia better and what bin Salman did to Jamal".
As well as boosting MBS as a reformer, Renzi said he envied labour costs in Saudi Arabia, where many immigrant workers are paid slave wages in appalling living and working conditions.
Renzi has promised to explain his remarks, while acknowledging that the labour cost comment was "not one of my best".
The former centre-left Democratic Party (PD) leader, who sparked Italy's government crisis by pulling IV out of the ruling coalition leading to Mario Draghi's appointment at the head of a national unity government, has been widely criticised for his paid speech in Riyadh.
Cengiz also told ANSA that the Weest should impose sanctions on MBS because he had not been punished for what he did to her late boyfriend.
"I don't think any justice ha been done for Jamal's murder. Now we know that (MBS) can order the murder of an innocent person, and even after everyone knows what he did, there is still no punishment.
"I think there should be sanctions against the prince. Actions are needed, not just words." A trial on Khashoggi's death is set to restart in Turkey.
(ANSA).