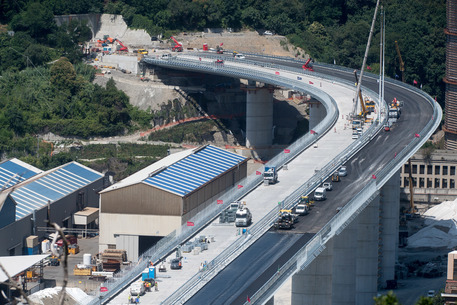 (ANSA) - ROME, JUL 13 - The Benetton family is "making fun" of Italians by failing to come up with a valid proposal for keeping its motorway concession after the 2018 Genoa bridge disaster that killed 43 people, Premier Giuseppe Conte said Monday.
The government has said it will strip Autostrade per l'Italia (ASPI), part of the Benetton-controlled Atlantia group, of its motorway license unless it produces an "advantageous" proposal by Tuesday. "The Benettons are not just making fun of the premier, but also the Morandi Bridge victims' relatives and all the Italians", Conte told various dailies.
Conte said the family "have not yet understood that this government will not agree to sacrificing the public good on the altar of their private interests".
Conte said "ASPI's bid to perpetuate the favourable regime in the case of fresh non-compliance with the concessionary obligations is unacceptable".
Centrist Italia Viva (IV) leader Matteo Renzi, for his part, said that the State should take out a stake in Atlantia.
"If the State really wants to return the motorway business, partially, to public onwership, then the only possibility is a capital hike by Atlantia and the intervention of (State bank) Cassa Depositi e Prestiti (CDP".
Atlantia sank a further 13% on the Milan bourse Monday. (ANSA).