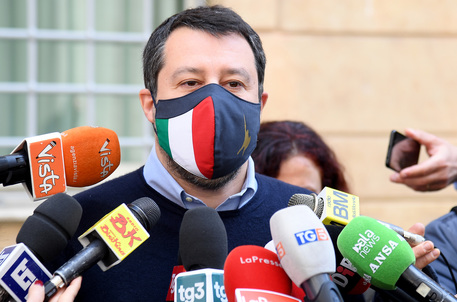 (ANSA) - ROME, APR 19 - League leader Matteo Salvini has alleged that a trial he will face later this year for allegedly holding captive migrants saved by a rescue ship is politically motivated.
Salvini is accused of 'kidnapping' 147 migrants on the NGO-run Open Arms ship when he was interior minister in 2019.
The Open Arms spent almost three weeks at sea after Salvini refused to give the OK for it to dock on the island of Lampedusa when he was a minister in ex-premier Giuseppe Conte's first government.
"The indictment, which does not deprive me of any sleep, is frustrating and very dangerous because it creates a precedent," Salvini, who was sent to trial at the weekend, told Il Corriere della Sera.
"The court is being used for politics".
The case is one of several stemming from Salvini's former closed-ports policy against NGO-run migrant rescue ships during his 14-month stint as interior minister. (ANSA).