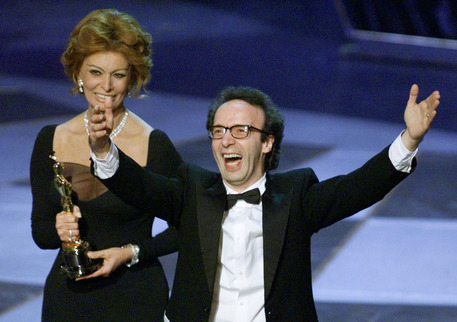 (ANSA) - VENICE, APR 15 - Life Is Beautiful Oscar winner Roberto Benigni will receive this year's career Golden Lion at the Venice Film Festival, organisers said Thursday.
The honour to the director, actor, and screenwriter will be awarded during the 78th Venice International Film Festival (1-11 September 2021).
The decision was made by the board of La Biennale di Venezia, which embraced the proposal of the Festival's Director, Alberto Barbera.
Roberto Benigni, in accepting, stated, "My heart is full of joy and gratitude. It is an immense honor to receive such an important recognition of my work from the Venice International Film Festival." Regarding this award, Director Alberto Barbera declared, "Right from his debut, marked by his innovative and irreverent approach to rules and traditions, Roberto Benigni stands out in the panorama of the Italian performing arts as an unprecedented and unequaled figure of reference. Juggling his appearances on theatrical stages, movie sets, and television studios, each time with surprising results, he shines in all of them thanks to his exuberance and impetuosity, his generous way with the public, and the passionate joyfulness that is perhaps the most original hallmark of his opus. With admirable eclecticism, and always true to form, he is one of the most extraordinary comedy actors in an admittedly rich gallery of Italian performers; a memorable director who makes enormously popular movies; and, his most recent transformation, one of the most esteemed performers and popularizers of Dante's 'Divine Comedy'. Few artists have equaled his ability to combine explosive comic timing, which is often accompanied by irreverent satire, with his admirable talent as an actor - at the service of great directors such as Federico Fellini, Matteo Garrone, and Jim Jarmusch - and as an engaging and sophisticated literary exegete." Roberto Benigni was born in Misericordia (Castiglion Fiorentino, Arezzo) on October 27, 1952. He began his career in the early 1970s and soon became one of Italy's most beloved and popular actors, directors, and screenwriters, well-known and appreciated throughout the world.
His film La vita è bella (Life is Beautiful, 1997), which he wrote and directed, received the 1998 Grand Prize of the Jury at the Cannes Film Festival and in 1999, of the seven Oscar nominations the movie received, it won Oscars for Best Foreign Language Film and Best Actor (as well as Best Music, awarded to Nicola Piovani). With the same film in 1999 he won the Screen Actor Guild and Bafta award as Best Actor. La vita è bella is Italian cinema's most popular movie: 9.7 million spectators. And it goes down in the history of Italian cinema as the Italian movie that has totaled the highest number of spectators worldwide.
Besides the four David di Donatello Awards and the four Silver Ribbons he won with La vita è bella, Benigni also received David di Donatello Awards for Il piccolo diavolo (The Little Devil, 1988) and Johnny Stecchino (1991); Silver Ribbons for Down by Law (1986), Johnny Stecchino (1991), and La tigre e la neve (The Tiger and the Snow, 2005); and, recently, a David di Donatello Award as Best Supporting Actor for his portrayal of Geppetto in Pinocchio (2019) by Matteo Garrone. In 2008 he received in Paris the César d'Honneur. In 2016, he received an Italian Golden Globe for Lifetime Achievement and the following year, a Special David at the David di Donatello Awards. In 2020 he was awarded the Prix Lumière for Lifetime Achievement.
He has also made his name in American cinema, acting with directors such as Jim Jarmusch (Down by Law, 1986; Night on Earth, 1992; Coffee and Cigarettes, 2003), Blake Edwards (Son of the Pink Panther, 1993), and Woody Allen (To Rome with Love, 2012).
His popularity in the piazzas of his native Tuscany convinced the 20-year-old Benigni to move to Rome. His first successes were in avant-garde theatre and, later, on TV shows (L'altra domenica, 1976, by Renzo Arbore, as a hilarious movie critic).
He then brought one of his own shows onto the silver screen, Berlinguer ti voglio bene (Berlinguer I Love You, 1977), directed by Giuseppe Bertolucci. Next, he put himself in the spotlight as the protagonist of Chiedo asilo (Seeking Asylum, 1979) by Marco Ferreri and of Il minestrone (1981) by Sergio Citti and he participated in La luna (Luna, 1979) by Bernardo Bertolucci and Il pap'occhio (1980) by Renzo Arbore. He played the lead in Down by Law (1986) by Jim Jarmusch and he was the surreal and poetic Ivo in the testament film by Federico Fellini, La voce della luna (The Voice of the Moon, 1990), co-starring Paolo Villaggio.
Benigni debuted as a director with Tu mi turbi (You Upset Me, 1983) and together with Massimo Troisi he directed the popular Non ci resta che piangere (Nothing Left to Do But Cry, 1984), the first of a series of box office successes such as Il piccolo diavolo (1988), starring Walter Matthau and the first movie he co-wrote with Vincenzo Cerami. Since 1987, he has worked with Nicoletta Braschi, the female lead in all of his movies and the co-founder in 1991 of the company "Melampo Cinematografica" which, from then on, has produced all their films: Johnny Stecchino (1991), Il mostro (The Monster, 1994), La vita è bella (1997), followed by Pinocchio (2002), which received two David di Donatello Awards and a Silver Ribbon, and La tigre e la neve (2005), which received two Silver Ribbons.
Benigni has proven to be an extraordinarily talented popularizer of high culture, performing and analyzing The Divine Comedy by Dante Alighieri; the Italian national anthem, Il Canto degli italiani; the Fundamental Principles of the Constitution of the Italian Republic, and the Ten Commandments of the Bible, all to great public and critical acclaim. In 2005, the President of the Italian Republic Carlo Azeglio Ciampi named him a Knight Grand Cross of the Order of Merit of the Italian Republic. He has received ten honorary degrees and many other awards and recognitions throughout the world.
On the occasion of Dantedì 2021, Benigni recited the Canto Paradiso 25, broadcast live from the Great Hall of the Cuirassiers at the Quirinal Palace and in the presence of the President of the Republic, Sergio Mattarella and the Minister of Culture, Dario Franceschini. (ANSA).