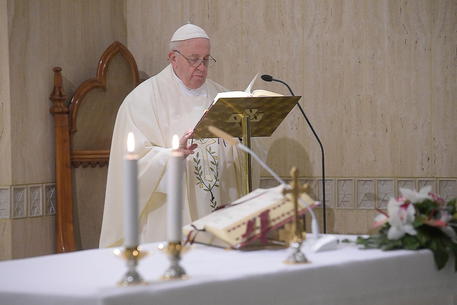 (ANSA) - Vatican City, January 20 - Pope Francis on Monday warned against antisemitism and populism in an audience with a delegation from the Simon Wiesenthal Center.
The pope recalled his visit to the Auschwitz-Birkenau concentration camp, and condemned antisemitism in every form.
The pope described "an increase in selfishness and indifference" in many parts of the world.
"This creates a fertile ground for the forms of factionalism and populism we see around us, where hatred quickly springs up", he said.
We need to address the cause of the problem by committing ourselves to "tilling the soil in which hatred grows and sowing peace instead", said Pope Francis.
"For it is through integration and seeking to understand others that we more effectively protect ourselves".
This means reintegrating those who are marginalized, reaching out to those far away, and assisting those who are victims of intolerance and discrimination, said the Pope.
Pope Francis concluded with a prayer to "make the earth a better place by sowing seeds of peace".
We need to put the "rich spiritual patrimony that Jews and Christians possess" at the service of others, he said.
"Not to take the path of distance and exclusion, but that of proximity and inclusion; not to force solutions, but to initiate ways of drawing closer together".
"If we do not do this", asked Pope Francis, "then who will?" In welcoming the delegation from the Wiesenthal Centre, the pope noted how it actively "seeks to combat all forms of antisemitism, racism and hatred towards minorities".
The Simon Wiesenthal Centre has maintained contacts with the Holy See for decades, said the Pope, "in a shared desire to make the world a better place in respect for human dignity. This dignity is due to every person in equal measure, regardless of his or her ethnic origin, religion or social status", he added.
The Pope said: "It is essential to teach tolerance, mutual understanding and freedom of religion, and the promotion of peace within society".
27 January will mark the seventy-fifth anniversary of the liberation of the Auschwitz-Birkenau concentration camp. Pope Francis recalled visiting the camp in 2016, "to reflect and to pray in silence". "In our world, with its whirlwind of activity, we find it hard to pause, to look within and to listen in silence to the plea of suffering humanity", he said.
The Pope reflected on how our consumerist society squanders words: "how many unhelpful words are spoken, how much time is wasted in arguing, accusing, shouting insults, without a real concern for what we say. Silence, on the other hand, helps to keep memory alive. If we lose our memory, we destroy our future", he added.
"May the anniversary of the unspeakable cruelty that humanity learned of seventy-five years ago serve as a summons to pause, to be still and to remember", said Pope Francis. "We need to do this, lest we become indifferent".