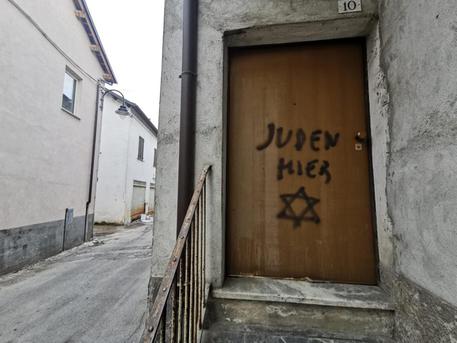 (ANSA) - Cuneo, January 24 - Anti-Semitic graffiti was found on Friday morning on a door of the son of a well-known Holocaust survivor in the northwestern town of Mondovì near Cuneo.
"Juden hier" (Jews are here), which was written in German cities during Nazism, appeared overnight on the door of Aldo Rolfi, son of Lidia, an Italian partisan fighter who was deported to the Ravensbruck concentration camp in 1944 and became a powerful voice denouncing the horror endured by Jews there after the war.
The woman lived in the Mondovì home until her death in 1996.
The road where the house is located has been named after her.
An apparent increase in cases of anti-Semitism and hate has caused concern from many quarters.
Indeed, Aldo Ricolfi wrote in the latest issue of the weekly magazine Provincia Granda that: "the hate emergency is colossal, palpable in all fields.
"The mind goes back to the dark, shameful nights of our history". Milena Santerini, the national coordinator of the fight against Anti-Semitism, expressed alarm.
"The 'Juden hier' graffiti in Mondovì on the door where Lidia Beccaria Rolfi lived and where her son lives today is an extremely serious sign of intolerance and provocation, precisely in the days in which we are remembering the Shoah," said Santerini.