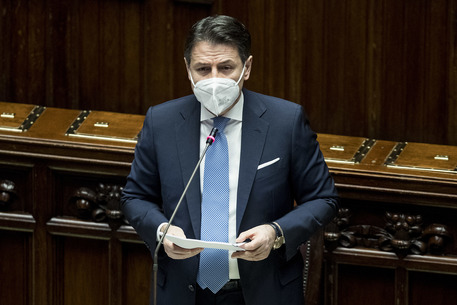 (ANSA) - ROME, JAN 18 - The Italian government crisis triggered by the defection of Matteo Renzi's Italia Viva (IV) party must be resolved by confidence votes in parliament, Premier Giuseppe Conte told the Lower House ahead of the first one Monday.
Appealing to centrist so-called 'constructors' who could replace IV, the premier called for the "limpid backing of liberals, popular party members and socialists".
Conte said former premier Renzi - whom he blamed for a "grave act of irresponsibility - had "opened a crisis that must find in this forum its clarification with transparency with respect to the clear action which marked my mandate".
Conte is seeking enough so-called 'constructors' to replace IV crucially in the Senate where he no longer has a majority and where he will face the second of the two confidence votes on Tuesday.
"We need the widest possible consensus among willing forces," Conte said as he addressed the possible 'constructors' who could save his executive.
Conte said the crisis had "dissipated energies in sterile polemics"; that it was "without any foundation", and that the government had improved the COVID Recovery Plan which Renzi had cited as the reason for his defection. He said the use of the European Stability Mechanism for health spending "doesn't come into it".
The premier said the crisis had damaged the country, and "what has happened cannot be cancelled", effectively rebuffing Renzi's tentative overtures to do a U-turn and return to the administration he brought down.
Conte said Italy "deserves a cohesive government" and called on lawmakers to now help it "turn the page".
He said the Recovery Plan would be "a collective and shared effort".
Conte said that his aim was to continue to bring about reform, "From the start I worked for the creation of the prospect of a board, courageous design for a new season of reform based on sustainability, social and territorial cohesion and the full development of the human person," Conte said as he appealed to the lawmakers to back his executive, "That vision is still present today".
The premier also said the government would promoted a proportional electoral system, appealing to lawmakers in the small centrist groups he needs to replace IV.
He also said he would "reinforce" the government team and would serve put the rest of the legislative term which ends in 2023.
"We will build a government that is open to those who hold dear the country's state and fate", said the PM.
Conte is appealing to parliament to keep his government alive after IV party triggered the crisis by pulling its support last week.
The premier faces the first of two crunch confidence votes in the lower chamber, with an even stiffer test coming in the Senate on Tuesday if his executive survives in the House on Monday.
He is set to appeal to so-called 'constructor' lawmakers from outside the ruling coalition to vote for the government and stop it collapsing in the middle of the COVID-10 pandemic.
The two senior partners in the ruling coalition, the 5-Star Movement (M5S) and the centre-left Democratic Party (PD), have already rejected the idea of patching things up with ex-premier Renzi.
But the PD has kept the door open to individual IV lawmakers and two have said that they will break ranks from the centrist group.
The centre-right opposition has called for snap elections, arguing that, even if the government survives the confidence votes, if will be too weak to effectively rule the country.
Life Senator and Holocaust survivor Liliana Segre said she will defy medical advice and will be in Rome to vote for the government, describing the crisis as "incomprehensible". (ANSA).