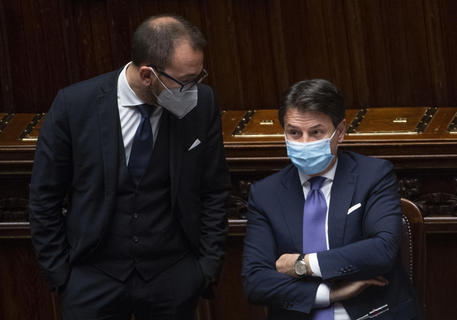 (ANSA) - ROME, JAN 25 - Premier Giuseppe Conte was studying his next moves on Monday with the future of his coalition government still highly uncertain.
The executive won two confidence votes in parliament last week after ex-premier Matteo Renzi's Italia Viva (IV) party triggered a crisis by withdrawing its support.
But it failed to muster an absolute majority in the Senate. The centre-right opposition has called for Conte to quit and new elections to be held as the government does not have a working majority in the Upper House.
Attempts to bring in so-called 'responsible' or 'constructor' lawmakers to support the government and make up for the loss of IV seem to have been fruitless so far.
The government is set for a new showdown in the Senate with a vote on report by Justice Minister Alfonso Bonafede later this week.
Conte has so far resisted pressure to hand in his resignation to President Sergio Mattarella and seek a mandate to try and form what would be his third government with a new alliance.
There has been speculation that IV could come back into the ruling alliance if this were to happen, even though the two senior partners in the current coalition, the 5-Star Movement (M5S) and the centre-left Democratic Party (PD), had ruled out reopening the door to Renzi's group.
IV sources said the party was ready to abstain in the justice report vote, as it did in last week's confidence votes, but only if gets a "signal".
Furthermore, the PD and the M5S seem less categorical about standing by Conte at all costs.
Indeed, one option would be for a new government to be formed under a different premier with the support of Silvio Berlusconi's centre-right Forza Italia (FI) party to make sure the government's COVID-19 Recovery Plan is delivered.
The government is set to hold talks with business representatives on Monday to discuss the plan on how to use over 200 billion euros Italy will get in grants and low-interest loans from the EU Recovery Fund. (ANSA).