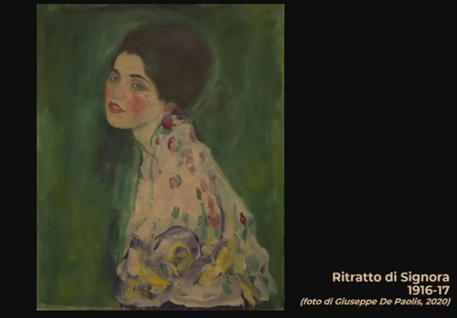 (ANSA) - BOLOGNA, MAR 3 - Italian prosecutors have dropped charges regarding a Gustav Klimt painting stolen from a Piacenza gallery in 1997 and found behind an external wall of the same gallery in December 219, judicial sources said Wednesday.
The 'Portrait of a Lady' was stolen from the Ricci Oddi modern art gallery in 1997.
Charges have now been dropped against three persons suspected of theft and receiving stolen goods.
A preliminary investigations judge (GIP) will now rule on the prosecutors' request to shelve the case against them.
Prosecutors said the case would remain a cold case.
Austrian master Klimt's famed portrait was once listed among the greatest stolen art works in the world.
In January 2020 two Piacenza burglars reportedly confessed to stealing and then returning the Klimt portrait which was declared to be authentic after being found in the bowels of the museum in the northern town it was stolen from.
During work to clean up ivy covering the gallery's exterior wall on December 14 2019, an interspace closed by a door was discovered, behind which there was a bag containing the picture.
It went back on permanent display in the Piacenza gallery last November. (ANSA).