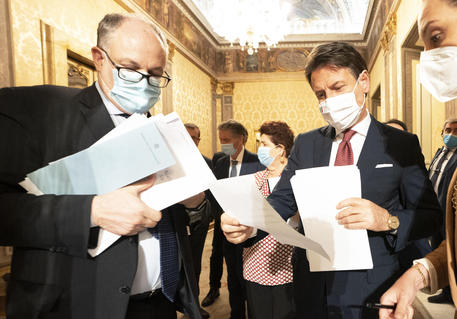 (ANSA) - ROME, OCT 19 - The government's new 2021 budget bill is aimed at restoring Italy's confidence and development, Premier Giuseppe Conte said Monday.
He noted that there were significant resources for the healthcare, transport and schools sectors.
Conte also said the budget marked the first piece of an organic reform of the tax system.
"We have earmarked 5-6 billion to launch the single cheque from mid-way through the year," he said.
Conte said the budget had "two aims, support and relaunch for the economy, and we have elaborated a project that looks to restoring the country's confidence and development.
"There are significant resources o boost health, to boost school transport, support the sectors most hit (by COVID), for a new cycle of lay-off benefits, and for measures of support to favour the liquidity of businesses".
The premier said "we will set to work immediately for an organic reform of the tax system" and said "we aren't lowering our guard on COVID, but looking forward", after a swathe of tighter measures against a recent second surge.
He said work on a COVID 'Resilience Plan" was "moving forward apace.
He said the government was lining up projects to profit from the EU's Recovery Fund.
"We are going forward without lowering our gaze due to the (pandemic), we're not lowering out gaze but we're going forward".
Addressing the same press conference, Economy Minister Roberto Gualtieri said the single cheque would be "up to 200 euros per child".
He said the government was marshalling some 70 billion euros for the recovery, including the budget bill and other decrees.
(ANSA).